When you have a smoking engine it is important to identify the cause to prevent long term damage. In his latest article Andrew investigates the potential causes to help you diagnose a smoking engine.

This diagnosis is specific to diesel engines. While there are similarities with petrol engines, diesels have their own unique problems.

While a smoking engine can have many different causes with several existing on the same worn engine, some of which can only be confirmed by internal investigation, there are a number of steps that can be taken to home in on the likely cause(s).


Are There Any Other Problems?

Sometimes smoke is only one of several problems with the engine.

What Colour is the Smoke?

Smoke would normally be in one of the following three colours although a warn engine could demonstrate all three at different times.

Black smoke is part burnt fuel, typically seen with engines under very heavy load. For classic and vintage tractors with purely mechanical fuel injection there will always be some black smoke under heavy load so one needs to compare the engine with similar ones under equivalent conditions (e.g. on a road run or ploughing match.) Excess black smoke could be down to one or more of the following:

White smoke (not steam as seen from a cold petrol exhaust) is normally an indication that the fuel didn’t actually start to burn in the cylinder. This smoke will normally have a strong smell of diesel.
The two most common causes of white smoke are faulty glowplugs or low compression:

On tractors like the Bradford built IH B series tractors a fault in any of the series connected glowplugs or the dash indicator will stop ALL glowplugs working and the engine will be difficult or even impossible to start but will tend to produce clouds of white smoke.


On other tractors with parallel connected glowplugs it is possible to have one cylinder’s heater faulty allowing the tractor to start (with difficulty), low power and lots of white smoke until self-heating allows combustion to start in the final cylinder. The engine will then run normally.

Diesel engines use compression ignition – there must be enough compression to raise the temperature of the air/fuel mix (sometimes with the help of glowplugs) to the point where it will start to burn.

If the compression is very low then there may never be any combustion in a cylinder so just producing white smoke.

If the compression is moderately low on a cylinder then there will be no combustion until the engine has warmed up. This will show as difficult starting with lots of white smoke including when initially started, but runs much better when warmed up. The difference between this and a faulty glowplug is that with a faulty glowplug once a cylinder starts to fire it continues to do so with the smoke effectively just switching off while low compression will take time before the smoke stops or reduces. Sometimes the smoke will be present at lower engine speeds as there is more time for gasses to leak past the piston rings but stop at higher speeds.

So called “blue” smoke is actually white with a bluish tint, sometimes with an oily rather than diesel smell.

If this occurs only for a couple of seconds on starting then it is probably due to worn valve seals or guides where oil runs down the valve stem when the engine is stopped but is burnt off when the engine first starts.

Blue smoke when the engine is running normally is usually due to a glazed bore (compression and starting are often ok), a worn bore or broken/stuck rings.

Glazed bores are normally a consequence of only running the engine on light duties. In mild cases this will sometimes improve with heavy work (e.g. ploughing or flail mowing) but the bore will often need honing.

A diesel compression tester is relatively cheap – at the time of writing they are available from about £25 via the internet.

This one that I’ve used for a number of years as it includes a M18x1.5 adapter that fits the glowplug holes on my IH B275 and 434 engines.

Testing an engine fitted with glowplugs is relatively easy as the cheap testers screw in place of the glowplug. Non-glowplug engines may need slightly different testers which will replace the injectors so ensure that you buy the correct type.

This is another example of a compression tester available online. It unfortunately doesn’t include the M18x1.5 adapter but could provide a solution for other engines.

How To Compression Test

When compression testing, always ensure that the engine stop is pulled out to cut off fuel – one doesn’t want to flood the bores with unburnt fuel.

To complete testing you will need:

Getting the compression figure isn’t always that easy. A workshop manual is the obvious first step – for my IH B275 and 434 the figures are:

Converting from compression ratio to pressure isn’t simple. As the gas is compressed it heats up which also causes an increase in pressure. Just knowing the compression ratio doesn’t take into account when the valves open and close, gas speeds and several other factors. If you don’t have the figures for the engine under test you’ll either have to guess or find a similar good engine to test as a benchmark.

In reality, the compression test tends to be most useful for comparing cylinders – a good engine usually matches to within about +/-10%.

On good engines I’ve seen something of the order of 350 psi for the B275 and 450 psi for the 434 with my tester but, as there’s no calibration certificate with the tester, I don’t know how accurate its numbers are. Below about 315 psi and 405 psi respectively for these engines would tend to indicate problems.

Re-bored or re-lined engines often tend to be slightly lower compression until they’ve had chance for the rings to bed in so don’t be too surprised if the values are a little on the low side on some of the cylinders.

If compression is low on a cylinder, try adding a couple of squirts of oil from an oil can into the bore and repeat the test. If the compression has gone up then the bore is likely to be the problem, if not then head gasket or valves are the more likely culprit.

Compression testing can indicate that there is a problem on one or more cylinders, but why? Possible causes include:

An alternative way to get a bit more information is to use a leakdown tester like these, again available via the internet currently for under £25. 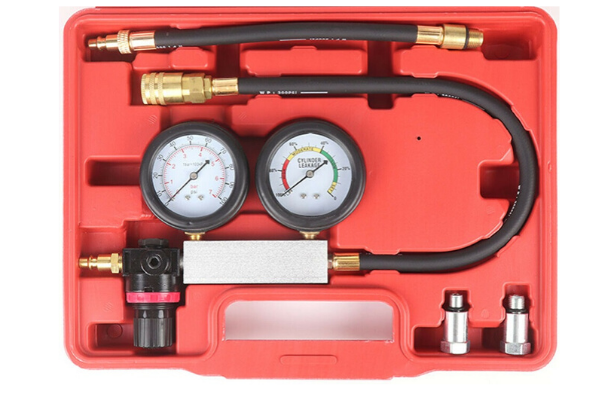 The leakdown tester takes air from a compressor and, in this example, through its own pressure regulator with the left gauge showing that pressure.

In the aluminium block between the two gauges is restriction in the air path. The faster the air flows through the restriction, the greater the pressure drop. When its output is connected to a cylinder (in the same way as the compression tester) the flow rate will be determined by leakage in the cylinder. The leakdown test is a static test (engine not rotating) but the engine will need to be turned over to where both of the cylinder’s valves are closed.

Some people prefer this method to the compression tester. It takes a little more effort to use as one has to adjust the input pressure to get a sensible range of values on the second gauge but listening and looking for where the air goes can provide additional information:

Hopefully this article has been of help and you have a better idea of the reason for the smoke and how to resolve the problem.

You may decide to just live with things - most of the time this will not cause any major issues other than for example poor starting.

The one area however that should get immediate attention is a potential leaking cylinder head gasket as I’ve seen cases where ignoring this can lead to needing a new head, liners and pistons.

BACK TO TECH TIPS >>